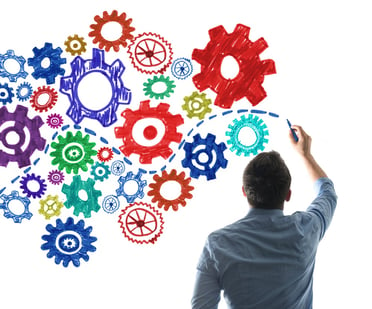 Before I came to work at HubSpot I had the chance to observe a good number of sales processes.  And there were a few things that really stood out to me.  I realize this is going to sound incredibly obvious, but I am absolutely convinced that the majority of organizations still sell this way.

My Observations on How Inbound Selling is DIFFERENT, Having Been In the Buyer's Seat

First, if a sales rep got me on the phone, I was usually willing to listen to what they had to say.  I took cold calls because I didn’t know what I didn’t know.  I always had a couple of minutes to talk to someone.  Of course, if I were getting bombarded with calls in a day, I’d start turning them down.  But in general, I was pretty open to connecting with someone.

Second, when I did connect, I often found that I would share a small insight about the business, and the sales rep would latch onto that.  They would rarely ever dig deeper to understand the meaning behind the meaning, so to speak.  For example, they might tell me that their business helps small businesses reach more prospects.  They would ask a question about how we go about identifying and reaching out to prospects now, I would answer, and they would immediately jump into how their product or service helped.  They didn’t dig deeper.

This brings me to the third point -- which is that most reps I spoke with were incredibly “them” focused.  They felt this incredible sense of urgency that I did not feel.  If I had to break it down psychologically, I’d imagine that they felt, “Oh shit, I actually got someone on the phone.  This is my chance.  I’ve got to nail it.  I won’t get someone on the phone for another 90 dials.”  Or, they had a big sales quota they needed to hit and felt self-imposed pressure.  Or, equally likely, they had a sales manager pushing them to their breaking point, micro-managing results out of them.

Most Sales Reps Fail to Understand Their Prospects... Because They Do Not Care

What they failed to realize was that I did not feel this same sense or urgency.  We were talking.  They were talking, I was listening.  I wanted them to understand me.  I wanted them to really understand me and what I was looking for help with.  Yet to no avail, after a 15-30 minute connect call where they kept highlighting a wide variety of facts and figures about their business and their customer base, they would typically transition into asking me questions about my budget, who has decision-making authority, and when we could “get a demo” booked.

Of course, at least in the software sales business, I was always talking to a “development” specialist and would be set up with an “expert” afterwards.  This is the Salesforce model (as discussed in Predictable Revenue).  I like the notion that businesses are separating prospecting work from closing new business, but that was just the very first step in creating an efficient sales model, not an Inbound Sales model.

I especially found this to be true when talking with software sales reps.  I HATED it.  And the worst part about this is NOT that I had to go through a shitty sales process with them.  Instead, the problem is that because this is the way they sold, the market accepted being sold to this way.  They expected the reps to ask only surface level questions.  To not educate them about the market.  To contextualize my unique challenges around their service or product.  They just wanted to get me on the phone, understand my budget and decision-making power, and get on the demo.

Inbound Selling, in contrast, flips this paradigm on its head.  It more or less takes a “Fight Club” approach to selling, the first rule of which is that you do not talk about your company, product, or service until you absolutely have to.  And when you do, you keep it as concise as possible.  There’s a time and place for talking about your business and how you help, but the connect call and exploratory calls are NOT the times to do it.  You must give, or create, an enormous amount of value before you get anything back from your prospective new customer.

All Good Sales Organizations Start with a Clearly Defined Sales Process, and Is Where Our Understanding of Inbound Selling Begins

Recently reading a research study from Salesforce, I was really surprised to see that almost half of all sales teams do not have a documented sales process (Source: https://www.salesforce.com/blog/2013/08/sales-managers-performance.html).  Further citing this study, the sales teams that DO follow a clear sales process are 33% more likely to be high performers.  And the win rate exceeds 50% for two-thirds of companies that have a defined process in place.

By now, I hope this is common knowledge.  But if you’re working on a team that does not have a sales process, or if you’re leading a team that does not have a documented process, I’ll share the one I know with you.  Granted, this is not going to be a drag and drop approach.  It will require a lot of customization to your own business and to your own buyers; however, the underlying concepts should still be broadly applicable to you and your team.

In the next post in this series, I'll cover the first two stages of the Inbound Sales Methodology (credit to HubSpot, but in my own words and experience as a sales rep from 2012-2014) -- Identify, and Connect.