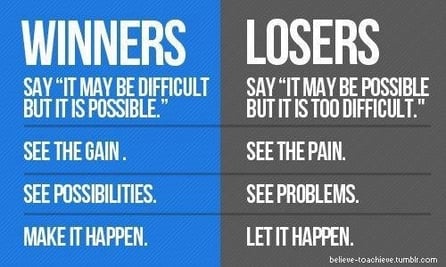 As a sales leader I've been thinking a lot lately about what makes some sales reps successful, and makes others fail.  Having managed my own team for quite some time now, I've made good hires and bad hires and any sales leader will tell you that they're always on the lookout for new "A Players".  Well, it's easier said than done.

I've read a few good articles about this, and of course have my own experience to draw from, so I'll share a synopsis of both.

What a Sampling of Experts Say about Sales Rep Failure

From Garrett Goh at InsightSquared on why some sales reps fail (9 Reasons Some Inside Sales Reps Fail):

While I agree with 99% of these "top 10"-style lists, there's nothing that replaces front-line experience.  That's not to say of course that these authors above don't have that experience; they surely do.  But living the sales manager life day in and day out, my firm belief is that sales rep failure or success comes down to four core attributes that Pete Caputa, VP of Sales at HubSpot, taught me in 2012.

1. Desire and commitment (or lack thereof) to be successful in sales no matter what

This is pretty self-explanatory, but if a rep does not have the actual desire and commitment to be successful in sales, no matter what, then you've lost them from day one.  It's important to understand, of course, what motivates an individual to work in sales in the first place.  Some questions I like to ask to uncover this might simply be, "Why did you decide to initially work in sales?  How has that changed or evolved over time?"  Or, if the candidate has no prior work experience in sales, I might ask, "How did you come to the conclusion that you want to work in sales?"  Simple questions, obviously, but listening to the level of specificity provided in the answer, and thoroughness of the response should be your queue to understanding an individual's true motivation.  Hint -- if they lead with "money", they're probably on the wrong track.

2. Takes responsibility (or not) for all sales outcomes, no matter what

How many pipeline reviews, film reviews, or coaching sessions have you done with a new rep or B/C player on your team only for them to pull out every excuse in the book on why something went wrong? The reality is that sales people are in sales because they usually have the gift of communication.  They will find a way to convince you or talk you into/ out of many decisions and actions.  The key here is to understand that if a rep always makes excuses, they are not going to be coachable and if they're not coachable, there is a very low likelihood for them to be successful.

3. Has a positive (or negative) outlook on themselves

The best question I've used to test for this is difficult, but powerful: "What's your single greatest accomplishment?"  Again, listen for the level of specificity in their response.  Dig deeper and make sure you ask what sets this accomplishment apart from others.  What is it specifically that makes them proud?  If they hesitate too long, can't find a good example, or cannot elaborate on why it is the SINGLE greatest accomplishment, they're not an A player.  A Players are life-long achievers, and they're typically neurotic.  They won't necessarily be arrogant, but you can rest assured they're keeping track of their "biggest wins".

4. Has a positive (or negative) outlook on the products or services their company sells

This last point probably goes without saying, but I always want to udnerstand why specifically a rep wants to work for any given company.  I will dig very deep on what specifically they know about the company, what they know about its customers, the problems its company's products or services solve, and what sense of gratification they derive from bringing those things to market.  If they give vague answers or haven't done their homework, I'm going to automatically disqualify the individual because it tell me they're just looking for a paycheck, not a purpose.